St. Conaire’s Choir in Skycourt with Nationwide from RTÉ 1 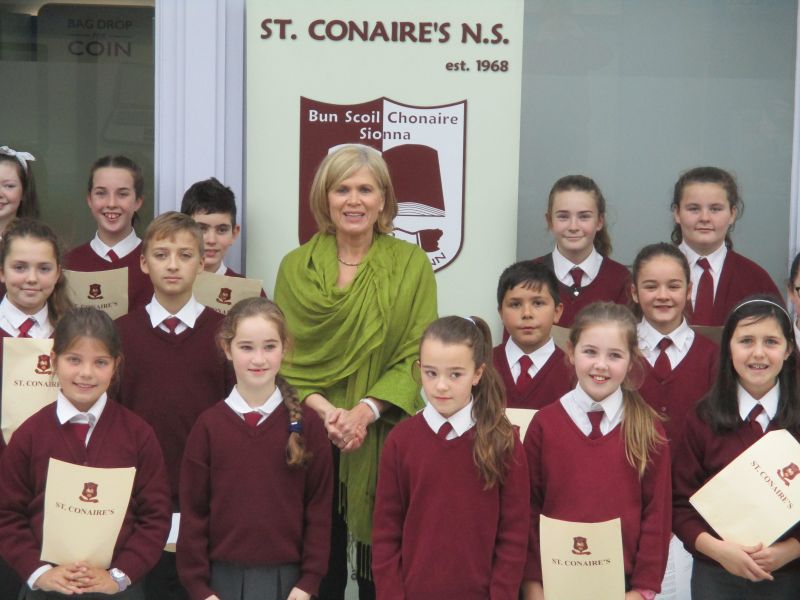 Our school choir took part in the filming of a Nationwide programme for RTÉ 1 in Skycourt today.  The choir sang a number of tunes and were warmly received by the public.  The occasion was the recording of an episode about Shannon.  The crew are spending three days in Shannon and our choir reprised their role in the Mercy in the Mall event which was such a success in December 2015.  The pupils and teachers got to see how a TV programme is filmed and were delighted to meet its presenter, Anne Cassin.  Many thanks to the girls and boys of the choir who sang so beautifully;  many thanks also to Ms. Cleary, Ms. White, Ms. McDonagh and Mr. Pilkington who provided the music for the event and who give of their time to teach the children choral music.  Thanks also to our caretaker, John Dempsey, who transported the necessary equipment to Skycourt.  The relevant episode of Nationwide is due for broadcast in the next two months so watch out for St. Conaire’s Choir on the television.  You can see lovely images from the day here:  St. Conaire’s Choir in Skycourt with Nationwide