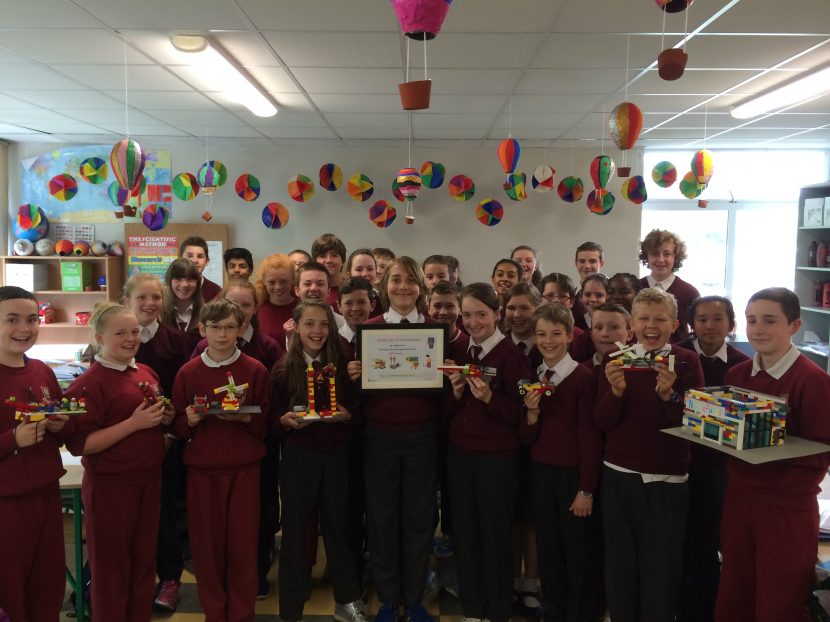 Lego Wedo is based on the idea of constructing and programming an object. Firstly there are a lot of Lego bricks but once you delve deeper into the box you uncover loads of other things like motors, gears and sensors. With a motor attached to the Lego and the right programming you can make your project do almost anything.

One day, Mr. Connell announced that on the 19th May there would be a Lego Showcase in Ennis and due to all the great Lego projects being completed in the school that we were to take part. We would have to think of an original idea, construct it and then programme it. We were all put into groups of four and asked to discuss our ideas with each other. Once discussed, the best ideas were chosen and looked at in more detail.  Most groups didn’t stick to original ideas but rather they altered them in some way to make the Lego work better. Some days we had to build our structures and it was amazing to look around and see everyone working on their projects. We also had to programme our Lego. This was difficult and sometimes frustrating but we really improved through trial and error. After days and days of building, programming, testing and occasional arguments, we were all ready for the showcase.

We were all very nervous on the 19th May as we were going to be showing our Lego projects to adults and children from many other schools in Co. Clare.  When we reached the big hall we set up our stands. Pat Hanrahan, Head of the Clare Education Centre, welcomed us. He spoke about the importance of Lego in helping children learn about science, technology, engineering and math.  Once the showcase began we really began to enjoy ourselves. It was fun answering questions about our projects and it really gave us an opportunity to show off all the great work we had done. Other schools showed some good projects as well but I think we were the best.  It really was a great evening and we hope the school gets the chance to show off our expertise with Lego WeDo again.

Click here for pictures from the Lego WeDo Showcase 2015.