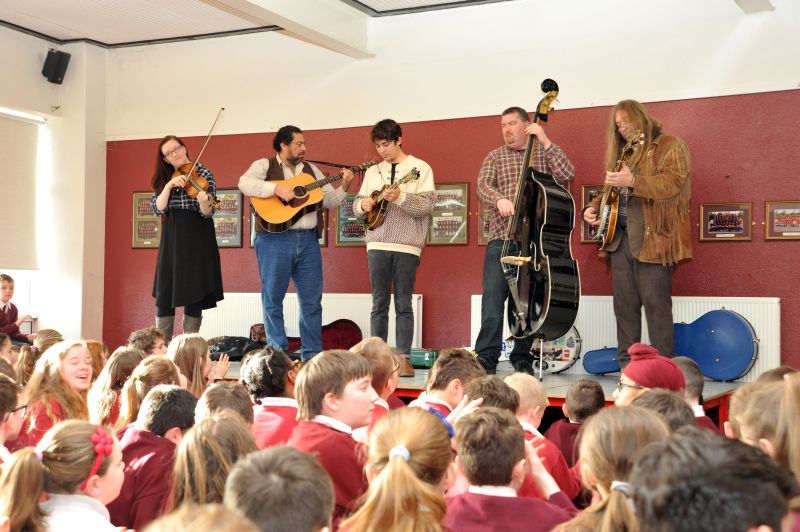 American bluegrass band Jeff Scroggins and Colorado visited St. Conaire’s recently during their tour of Ireland.  The five piece band played two sets for the pupils.  2nd to 6th class pupils were treated to an electrifying displaying of playing and singing.  This concert gave pupils a chance to understand a different genre of music and engage with a live band.  Bluegrass music has its roots in the Appalachian Mountains of the eastern US and this was explained to the audience by band leader Jeff Scroggins.  Junior Infants to First Classes then got to see an amended set and were equally enthralled by the great playing, singing and interaction with the audience.  Teacher Mr. Pilkington joined the band on stage and led the pupils and teachers in singing for Jeff and his band.  The school choir with Ms. Cleary and Ms. White also performed for the audience.  It was a lovely visit and we thank Mr. O’Brien, John Nyhan and the band for taking the time to come to St. Conaire’s.  Many thanks to Mr. O’Brien for arranging the event.  A warm word of thanks goes to John O’Brien of O’Brien Photography Bunratty for the lovely pictures.  Click here to see a gallery of photographs of the concert.