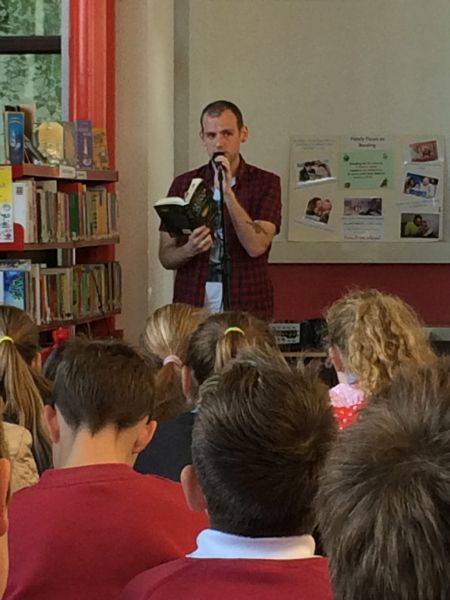 Mr. O’Connell and Ms. O’Driscoll took their classes to Seán Lemass Library on Thursday, October 2nd, 2014 for a creative writing session with author Alan Early.  Alan took the pupils through the book creation process.  All who went enjoyed the time with Alan.  It was a great insight into the world of writing and it certainly assisted our young writers in understanding the processes involved in writing.

On Thursday, October 2nd, 2014, the children of St. Conaire’s 6th classes went to the Shannon Library to see author Alan Early for the Children’s Book Festival 2014.

First, Alan told us what his books were about and where they are based.  His books are about a boy called Arthur Quinn who moves from Kerry to Dublin.  He and his friends find a pendant from the Viking Age and they want to know more about it.  The Viking gods also feature in the books.

Alan then played a quiz game called Who wants to be a Viking god?  Zoe and Mattie were asked to come up and answer the questions for the game.

Next, he talked about what some authors do to design characters for their books.  Some might pretend to have a conversation or interview them but Alan pretends they are too lazy to fill out their Facebook page so he has to do it!  We too got to create a character in this fashion.  First we chose whether it was a god or goddess.  The majority of people picked goddess.  We then made her one hundred times bigger than the Spire, as fat as the world with giant muscles and we gave her an afro.  Then we focussed on her personality (which was very eccentric) and also where she lived.  She lived in a castle made from sweet wrappers and there was a portal in her castle which led to KFC.

Then Alan spoke some more about his books and how they came to be as they are now.  He explained that it may take a lot of time before a book can be put on the shelves for us to read.  First of all, you have to write it and make it as good and interesting as you can.  Then you have to send it away to see if someone will publish it which may take a long time just waiting for an answer.  And then you have to agree on a cover.  He told us that by the time the other publishers got back all three covers of his trilogy were designed and ready to print.

Finally, we got to ask some questions.  There were lots of amazing questions.  We found out lots of interesting facts about Alan and how he always wanted to tell stories even if it wasn’t writing and that he loved Roald Dahl books as a child.

I think Alan Early sounds like a great author and I would love to get to read his books.